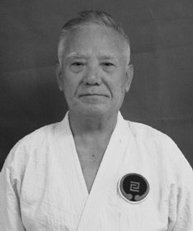 An´ichi Miyagi was born in Okinawa on 9th February 1931. When he was fourteen both of his parents died. He was then left with the task of raising his two younger brothers. He began his karate training with Chojun Miyagi Sensei in 1948. Such was his devotion to karate and respect for his teacher that he was taken as Uchi Deshi (special student) by Chojun Sensei.

During this time An´ichi Sensei practiced all the kata of Goju-ryu along with the basic bunkai and many of the hidden bunkai were also taught to him, he diligently practiced Hojo-Undo, Junbi-Undo and Sanchin to increase his power. This strict regime went on until the untimely death of Chojun Sensei on 8th October 1953.

After a respectful period of mourning for Chojun Sensei, it was decided to continue with the dojo in Chojun Sensei´s garden. Many of Chojun Sensei´s seniors from before the war helped. Miyazato Eichi assumed the role of dojo head and Koshin Iha was in charge of administration but An´ichi Sensei did most of the teaching. The garden dojo began to grow and amongst the new students was a young teenager by the name of Morio Higaonna. Eventually it was decided that a new permanent Dojo was needed. All the senior students, including An’ichi Sensei contributed to the construction of what is now known today as the Jundokan Dojo. An’ichi Sensei continued to teach Goju-ryu at the Jundokan and began teaching Morio Higaonna, who was now his most dedicated student, more and more. As time progressed, a difference of opinion came between the senior instructors of the new dojo and Anichi Sensei left the Jundokan never to return.

Morio Higaonna Sensei moved to mainland Japan around the same time and went on to found the International Okinawan Goju-ryu Karate-do Federation (IOGKF) with his teachers permission and An´ichi Sensei served the IOGKF as Honorary Chairman and was the personal advisor to Morio Higaonna Sensei for many years up to his passing away in 2009. We have been very fortunate to have benefitted from this direct link back to the founder of Goju–Ryu, Chojun Sensei.

The mantle of the future development of Goju–Ryu of course passed to Morio Higaonna Sensei and now to Tetsuji Nakamura Sensei.