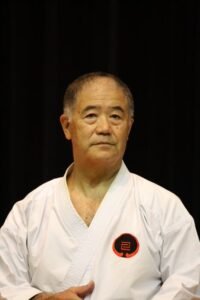 Morio Higaonna was born 25th December 1938, and he began his karate training when he was fourteen. He studied Shorin-Ryu with his father. He was also training with a friend, Tsunetaka Shimabukuro, another Shorin-Ryu stylist. At the age of sixteen he began to train in the Goju-Ryu style on the recommendation of Shimabukuro Sensei. The year was 1955 and the young Higaonna was training in the garden dojo of the late Chojun Miyagi Shihan, his instructor was An´ichi Miyagi Sensei.

At that time the training regime was very tough and Higaonna Sensei tells us of the countless times he would practice kata or kakie training with many different opponents until he could no longer move his arms. Anyone who has trained in Okinawa will know that due to the climate this requires tremendous effort.

In 1957 the garden dojo moved to a permanent building called the Jundokan. Higaonna Sensei continued his training there, five hours every day. After his instructor, Anichi Miyagi Sensei moved away to work on an American oil tanker Higaonna Sensei gained a place at the Takushoku University in Tokyo, it was around this time that the first official Dan grading was organised.

Higaonna Sensei was awarded 3rd Dan. The year was 1960. It was in Tokyo that Higaonna Sensei taught at the famous Yoyogi Dojo. Many thousands of students passed through this dojo and the legends of Higaonna Sensei abilities began to grow. Don Dreager was a western martial artist who travelled all over Japan documenting Masters for all martial arts styles. He made comments such as ‘There is no one here like Higaonna Sensei’ & more famously, ‘Higaonna Sensei is the most dangerous man in Japan in a real fight’.

During the late sixties and early seventies Higaonna Sensei began travelling to several of the countries that were practicing Okinawa Goju-Ryu. He was invited to perform a demonstration at the World Karate Championships in Paris in 1972 and his reputation as one of the strongest Goju-Ryu practitioners in the world was growing further.

In 1979 in Poole, England with the help of his senior international instructors the IOGKF was formed. The primary objective of the IOGKF remains the preservation of traditional Goju-Ryu Karate as taught by its founders, and it is now a proud member of the Nihon Kobudo Kyokai (Japan Traditional Martial Arts Association).

Higaonna Sensei spent time living in the United States of America where he established his headquarters in San Marcos for some time, before eventually returning to Okinawa, Japan where he currently resides. From that time to this, Higaonna Sensei has maintained his own strict training regime and continues to research the original kata and training methods of Goju-Ryu.

In July 2012 after over 35 years as the head of the IOGKF, Higaonna Sensei stood back to take an advisory role within the organisation and passed the title of Shuseki Shihan (Chairman and Chief Instructor) to Sensei Tetsuji Nakamura, selecting him to lead IOGKF into the next generation.

In 2013 Higaonna Sensei received an award from the Okinawan Government naming him as a living cultural treasure for the Island for his lifetimes work to spread Okinawan Goju-Ryu to the world as well as preserving it forever in its homeland.

In 2022 at the age of 84, Higaonna Sensei stepped down from his role as supreme master and IOGKF.