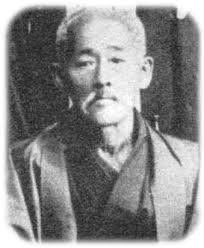 Please note that owing to the different ways Japanese can be translated into English you may often see Kanryo Hiagaonna referred to as Higashionna Kanryo.

Kanryo Higaonna was born in Naha, Okinawa in 1853, he was one of eight children. His father made his living trading firewood between the local islands. Kanryo Sensei helped his father from the age of ten, and the hard work made him very strong. From childhood Kanryo Higaonna showed great interest in the fighting arts and was eager to learn as much as possible. By all accounts he was known for being very supple and quick on his feet, despite his small size.

At age fourteen Kanryo Higaonna began to learn Chinese Kempo. His well developed and strong body enabled him to master Chinese Kempo and he quickly built a reputation as a martial artist master in Naha. Unsatisfied with his level of skill, Kanryo Higaonna longed to go to China to study the Chinese martial arts and their culture. Unfortunately, his family´s financial circumstances was unable to offer him the freedom to travel.

As chance would have it, Higaonna Sensei´s instructor introduced him to Udon Yoshimura, a ship-owner in the port city of Naha. It was Udon Yoshimura who eventually sponsored Higaonna Sensei´s passage to China. At the age of sixteen, he left Naha for the Chinese port of Foochow where he stayed at the Okinawan settlement called the Ryukyu-kan.

As a disciple, Higaonna Sensei would help his master at his trade as a bamboo craftsman by day and then train after dark. Training began with the practice of Sanchin, then lifting the Nigiri-game (heavy ceramic jars) by their rims to strengthen the student´s grip while practicing Unsoku-ho (a pattern of stepping movements) to develop proper footing. Exercises continued using the Muchi-ishi (natural stone) and Makiwara (striking post) as well as an Uki (bamboo basket) where two persons would practice close fighting and choking techniques inside.

These new tools and training techniques fascinated Higaonna Sensei and increased his interest in karate even more. The harsh training took its toll, however, and his legs, hands and shoulders were always swollen from over exertion. Nevertheless, it was this harsh training that enabled him to develop his muscles like forged steel. After several years of harsh training, he became his master´s most skilful disciple.

Throughout the city of Foochow, the fame of Higaonna Sensei as a great martial artist gradually spread. An episode involving a discussion between students of two dojos (training place) lead to a competition in order to demonstrate who was superior in skill. In order to choose a superior martial artist without anyone getting hurt, each master chose their best student to perform kata instead of free style fighting. Higaonna Sensei was chosen to represent his dojo. The students from the other dojo were struck with admiration as they watched Higaonna Sensei perform the Sanchin kata. Afterwards, the master of the other dojo admitted Master Ryu Ryu ko´s art was superior to his own and Higaonna Sensei´s fame spread even further. Many martial artists tried to engage him in a fight to prove their bravery but Higaonna Sensei kept his promise to his master not to fight to show off his skill and declined these challenges.

Higaonna Sensei´s fame spread rapidly throughout Naha, attracting the attention of the King of the Ryukyu Dynasty. Thus for many years, he taught the martial arts to the members of the royal family as well. However, many people in the town came to Higaonna Sensei and asked to be taken on as personal disciples. But due to the harshness of the training, only a few remained with him for long. Amongst his disciples, a young Chojun Miyagi was one of the few that remained. Higaonna Sensei had opened his house in Nishimachi as a dojo and was teaching his art to his disciples without charging any tuition. In addition to his private instruction, Higaonna Sensei began teaching at a public high school in Naha at the request of the principal in 1905. He introduced to the students both the physical and spiritual value of his martial art.

During his thirteen years in China, Higaonna Sensei mastered many traditional martial arts, such as, the art of the straight sword. His technique in these various martial arts was truly art in motion. His hands and legs possessed extraordinary spring making his movements fast as lightning. People were surprised that one so small, five foot one inch, could have so much power and strength and referred to him as Kensei, meaning “sacred fists”. Gradually, the art of Higaonna Sensei became known as Naha-te, “Naha” referring to the region of Naha in Okinawa and “te” meaning hand technique. He devoted his life, along with his disciple Miyagi Chojun Sensei, to the improvement and advancement of the art of Naha-te. Early in 1916, Higaonna Sensei fell ill and passed away in October 1916. Thus, the art of Naha-te was handed over from Higaonna Kanryo Sensei to his disciple Miyagi Chojun Sensei.

Higaonna Kanryo Sensei is honoured today as the founder of Naha-te karate.