I have attended many Gasshuku in Europe and Budosai in Okinawa, and this year from the 15th – 18th June I participated in the Miyagi Chojun Festival (MCF), a Gasshuku which has been held annually in North America since 1989. This year’s MCF took place in Spokane in the state Washington and was hosted by Sensei Gene Villa and IOGKF USA. 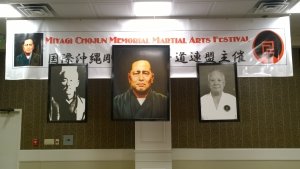 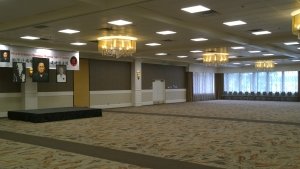 I had decided to go to the MCF this year, because typically there are several instructors teaching at this event, whom I have never had the chance to train with before. However, a few months ago when I told my teacher, Sensei Torben Svendsen from Denmark, that I was planning to go to Spokane, he immediately replied: “see you there then.” 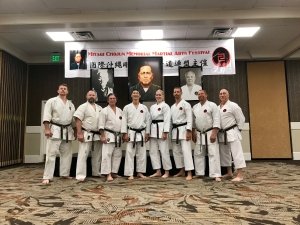 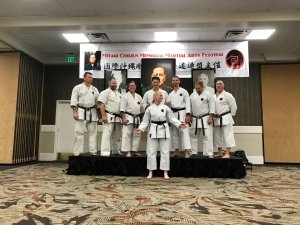 It was obvious at this event, that the senior instructors are sharing a very special friendship. The atmosphere was relaxed and there was room for several jokes and small hints between them of old stories – most of them still only known by the Sensei’s themselves.

There is always something special about the events where people are staying, training and even having the Sayonara Party at the same location. It is such a relaxing feeling, when you as a visitor are able just to train and be social without having to worry about logistics. This year’s location was the Red Lion Hotel, and the hotel offered great opportunities just to go and find the other karate people to hang out with either in the common area, where local musicians sometimes were playing, in the restaurant or the bar.

After the first day of training, we had a gathering at a pizza place close to the hotel and the shuttlebus very conveniently both took us there and picked us up later in the evening. The Sayonara Party the last evening was also held at the hotel. During the party, there was a big applause for the people, who had passed their dan grading, Sensei Bob Smith entertained us all with a beautiful song and on the dance floor a special edition of Shisochin was observed.

During the first day of training, Nakamura Sensei laid out an agenda for the senior group (yondan-nanadan), which meant that during the event, the senior group should go through all Kata’s down to the last detail. Nakamura Sensei went through most of the katas during the black belt morning sessions and his group sessions and Sensei Torben and Sensei Gene were also contributing. Furthermore, the training consisted of great partner drills with Sensei Bob Smith. Especially the joint locks drill generated smiles during the group session and the instructors demonstration – some of the smiles might have been due to the effectiveness of the techniques, but also due to the funny nicknames of the techniques like ‘Spinderella’.

There were also some special seminars scheduled in the afternoon, where everyone could participate. The first one was an iri-kumi seminar with Sensei Mirko. It was great training with focus on footwork, combinations and using the legs in blocking kicks. Despite some tiredness from the previous hours of training, everyone participated with great enthusiasm. Some of us – including myself – had some beautiful bruised shins as a souvenir from that seminar. I was enjoying mine in the following days. 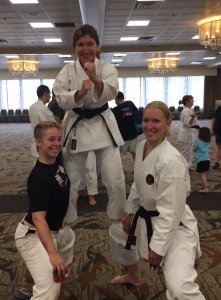 Sensei Gene Villa and his longtime friend Roy Harrington introduced a new perspective with their teachings in knife tactics, in the group session and at a special seminar. It was very nice to try something different, and the similarities to the Goju-ryu movements became more obvious during the sessions.

One of the things brought to our attention by Nakamura Sensei was that the IOGKF organization is in the middle of a generational shift. Nakamura Sensei is grateful that we are still having Higaonna Sensei to learn from, but he is also very much aware of the responsibility that follows from being the International Chief Instructor. Nakamura Sensei also expressed his gratitude and appreciation for the support of the senior instructors and all the people supporting this event through their participation. Throughout the event, several of the senior instructors supported the statement of Nakamura Sensei and for instance, Sensei Torben pointed out that we all have to think about how we can protect traditional Karate and avoid letting our egos get in the way – because we all have one.

Gasshukus offer a perfect opportunity to make new friendships across the organization and to get new inspiration for your own training, and they provide instructors with new inspiration for their teaching at home. Keeping up your own training while teaching classes can sometimes be a challenge, as most instructors are also having a full-time job next to the teaching. The inspiration, the motivation to improve and the friendships made are what makes us continue to enjoy training and to improve as students and consequently becoming better instructors. In the end, Nakamura Sensei pointed out in the senior group that it is our job as instructors to make our students better than ourselves.

Of course, this report is primarily based on the sessions, which I participated in. However looking around during the event, Karate students representing every belt color and every age group from kids to seniors were all training enthusiastically, with a focused look in their eyes, occasionally smiling and with sweat running down their faces. In the spirit training with Nakamura Sensei during the last 30 minutes of the event, the whole group came together and did the drill of “mo ichi do” – maybe to test how much sweat we could leave behind as a group.

Finally, thank you again to Sensei Gene Villa and the students of IOGKF USA for hosting this wonderful event and thank you to all the instructors for their great inspiration. I am grateful for the great hospitality, the great training and the new friendships made at this event. I recommend the MCF to any karate student at any level to come along and join this event in the future. I will definitely return myself!