Warning: Trying to access array offset on value of type bool in /var/www/wp-content/themes/Avada/includes/class-avada-head.php on line 174
Skip to content
Remastering Mastery

1985 seems like a long time ago. It was the year we went back to the future with Marty McFly, Ronald Regan was sworn in as president for his second term and the first edition of the now world famous traditional Karate books of Master Morio Higaonna were released.

The four book series became the first definitive text on the entire Okinawan Goju-ryu Karate style. Master Morio Higaonna was able share his mastery of his art at to the world fully with the careful use of a high speed camera and detailed explanations of each movement, and often the movements between movements. The book series has become a cult classic and although some small details have slightly changed or improved over the years, they are still highly sought after the world over.

However, unlike Marty McFly and Doc Brown, who after 1985 got a chance to be recreated and sold to the world again, Master Higaonna’s books did not. This has seen these books become as rare as hen’s teeth with second hand copies, some looking like they survived the battle of Okinawa themselves, being sold online for many hundreds and in some cases thousands per volume. They are literally Karate gold!

Many IOGKF and Goju-ryu instructors around the world still like to utilise the knowledge contained within these books during their personal training and class instruction. This was also the case for IOGKF New Zealand senior instructor Sensei Phil Dovaston, who often made mention of these legendary books to his students during class.

One such student was Nick Rhodes, who had been actively training with his children at Sensei Dovaston’s Dojo for over eight years. Upon hearing about all the wonderfully detailed content contained within the book series by Higaonna Sensei, Nick asked where he could purchase a copy. Like many of us, he learned that it was going to cost a pretty penny to purchase a second hand copy – this also being on the basis that you were lucky enough to track one down.

In the past Nick Rhodes had had experience hunting down rare books for family members and took up the challenge to seek out volume one of the series. By chance Nick was lucky enough to see what can only be described as a ‘very distressed’ copy of volume one at his local Dojo one evening, which a visitor to the club had brought along with them. Using his experience of hunting down rare books, Nick carefully extracted the ISBN number from the book and started hunting online for copies.

It wasn’t long before Nick was able to track down and purchase volume one, but quickly realised that to obtain the rest of the set was going to be quite costly – one volume alone had an asking price of over four hundred New Zealand dollars. While Nick flicking through the pages of his copy of volume one, contemplating on whether or not he would spend a hefty sum of cash on a book that had obviously had a hard life, he noticed an email address for the original publisher on the inside cover.

He contacted the original publishers to enquire if they had any copies to sell and if they would be interested in doing a small printing run of these books again.

Nick was saddened to hear that not only did the publisher not have any more copies of the books, but they had also lost the entire complete artwork of the books. This meant it was now impossible for them every to be reproduced again by the publisher.

The light bulb above Nick Rhodes’ head suddenly flickered on! Nick’s profession is graphic design and he specialises in typesetting. In recent years his work had seen him handle the recreation of old books and instruction manuals by scanning the original artwork and remastering them.

Nick then contacted IOGKF head office in Canada to see if they would be interested in obtaining a PDF copy of the original books or if they would be interested in exploring the copyright to see if they could publish them again. Our world chief instructor, Sensei Tetsuji Nakamura, replied very excitedly at the prospect of being able to share his teachers work with the world again and offered his full support.

Nick decided that at the very least he would try and scan volume one and make a PDF copy for those involved in his local Dojo and Nakamura Sensei. However, he quickly came to realise that when your second hand book is over 30 years old and the spine is stuck together with glue, that the it is going to have a hard time surviving the process. This brought about the arduous task photographing each individual page and processing them through ‘Optical Character Recognition’ (OCR) software, so an electronic file could then be created.

Can you imagine taking pictures of each individual page? The difficulty involved with lighting, shadows, angle and focus, just to name a few. 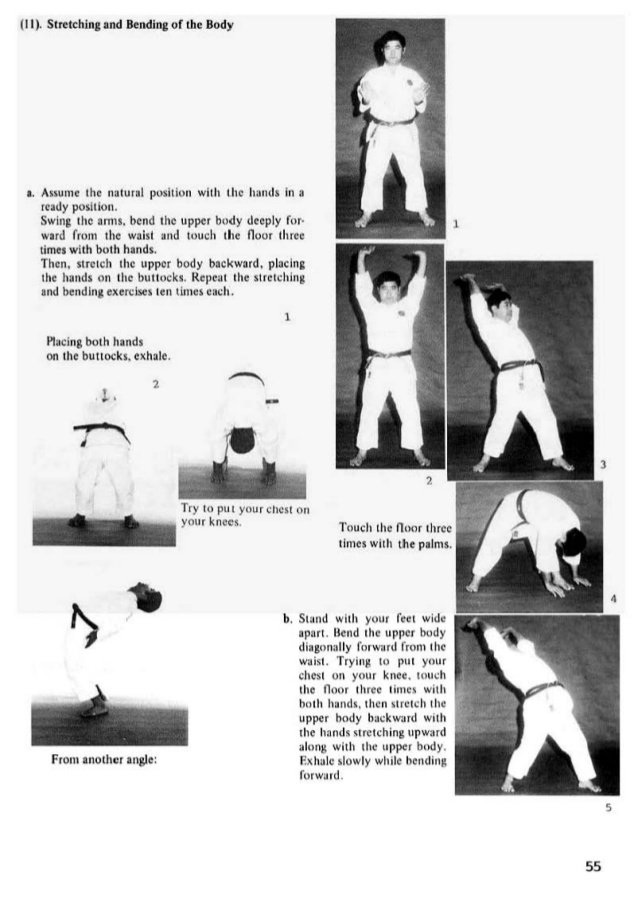 *Above images are not the remastered version

Any person who is lucky enough to have a copy of this set of books will know how many thousands of photos are included in each volume! Nick explained that Suparimpei Kata alone had over 366 frames, which exhausted him. Although this seems like a lot on its own, this is only small when you couple it with the over 6000 images included in the four volume set.

The entire project is estimated to have taken over 950 hours of Nick’s free time. However it wasn’t just a case of taking the photos and sticking them in the book. Nick Rhodes has painstakingly remastered every photograph, removing any blemishes or imperfections within the artwork. This process included many late nights and many early mornings. Nick realised the fatigue this process was causing him early one morning, when he was attempting to remove a spot from a picture, only to discover later it was a small spec of dust on his computer monitor.

Nick was able to obtain copies of volume two and volume three of the series and borrowed his Sensei’s copy of volume four to complete the set. After hundreds of hours of dedicated hard work and effort, Nick is happy to say ‘we got there in the end’.

‘I hope everyone enjoys reading them as much as I have enjoyed putting them back together.’ Nick explained. ‘Thanks again to Sensei Tetsuji Nakamura, for taking time out of his busy schedule for this project, Sensei Phil Dovaston for his inspirational teaching and Thelma Rhodes for all the proofreading and encouragement.’

IOGKF and the martial arts world in general owe a great debt of gratitude to Mr. Nick Rhodes for his incredible efforts on this project. He has literally remastered the mastery of Master Morio Higaonna for future generations to learn from and appreciate. On behalf of IOGKF International, we sincerely thank Nick for his services to our organisation.

Complete sets of these remastered books will be available for sale at the 2016 IOGKF world Budosai – No reservations! First come, first serve basis only! Sales of the full sets will begin on July 25th, 2016 for US$150 per set. Individual volume sales (subject to stock availability) will be sold from July 27th, 2016 for US$45 per book. PLEASE ENSURE YOU HAVE THE EXACT AMOUNT IN US DOLLARS TO MAKE ANY PURCHASES – NO US DOLLAR CHANGE WILL BE AVAILABLE ON THE SALE OF THESE BOOKS. CASH ONLY SALES ON THESE BOOKS – NO CARD FACILITIES.

The complete sets and individual volumes  can also be purchased through the IOGKF Administrative office in Burlington, Canada, from early August, following the world budosai event.  For shipping enquiries and pricing details please contact: admin.office@iogkf.com