Skip to content
Concerning the Path – By: Higaonna Sensei 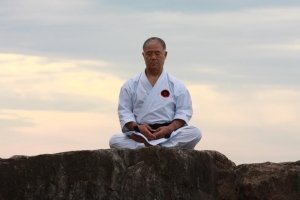 Through investigations into the history of martial arts, I would like to consider my own path. From the wisdom and teachings of our predecessors in Japan and Okinawa to the modern era, martials arts like Judo have come from Jujutsu, Kendo from old style Japanese fencing, and the Karate Jutsu of the past to the Karate Do of the present, and these martial arts were originally created for self defence but can now be practiced today to complete one’s character.

The Chinese Taoist philosopher Laozi, believed that the concept of the path represents both mind and spiritual enlightenment. I believe that to find this realization in life, one must practice asceticism and search with a true heart in order to live the most ideal life as a human being.

In the Karate Symposium of October 28th, 1936, which was sponsored by the Ryukyu Shinpo Company, Miyagi Chojun Sensei was quoted (translated quote) as saying, “I think that the phrase Karate do (Road) should be used, rather than just the word Karate”. Funakoshi Gichin Sensei and other top instructors agreed to this statement and together consented to apply the word Do when referring to Karate, to create the title of Karate Do. Keeping this in mind, I want to reflect on why Miyagi Chojun Sensei chose the name Karate Do, and what lead up to the change not only in name but concerning martial arts in general on Okinawa.

In 1933 Miyagi Chojun Sensei wrote a summary on Karate Do for a lecture that he presented. In this Karate Do summary there are many quotes (roughly translated) that refers to Zen in relation to martial arts and life. It explains that “Karate Do is an abyss, and it is grasped through deep thinking and understanding as is martial arts in general”. I determine this belief as the union of Zen and Martial Arts ordered by the mind and body, which will help me concentrate on the pursuit of true martial arts in my own life.

During his life, it is believed that Miyagi Chojun Sensei focused a great deal on the ascetic practices of Zen meditation in his pursuit of self, and to aid him in his training of character completion. Through his severe training in martial arts coupled with the ascetic practices of Zen, I feel that Miyagi Sensei was able to strive towards his own realization and true path in life. He was a true martial artist that only focused on this way of life, lived according to this way, and did not stray for the duration of his life. The spread of Goju Ryu around the world is just a testament to the art and way of life that Miyagi Chojun Sensei was able to pass on to all the future generations.

In regards to his Kata, Miyagi Chojun Sensei’s ability was hard to describe in words, as explained by his students, and his application of hard (Go) techniques were like a thrust of incredible power in an instant, while his soft (Ju) techniques could transition from whipping movements to sticky (muchimi) movements with great timing, and this application of muchimi would allow him to stick to his training partner with great strength. It was said that watching these performances was like watching a beautiful artwork in motion. Through his extreme and difficult training in life, Miyagi Chojun Sensei came to reach the Truth (true path) of martial arts, and has in return left the art for the world to practice with his teachings.

At times when Chojun Sensei would talk to a disciple he would tell them that “One must polish their character and become one with nature, to understand true karate”, and also, “The martial arts are one with the universe”. Often he would travel north to Kunigami for training, where there are many mountains and an equally plentiful amount of greenery and nature. During these trips, Miyagi Sensei would immerse himself in the nature of the mountains and the sea off the nearby coast, and it is believed that he also meditated in the midst of the nature around him.

Miyagi Chojun Sensei was a seeker of Truth in search for the correct path, and in closing, I believe that the ideal path in life for a martial artist is sought only through dedication and severe training in all aspects of Kata.

The path to true Karate Do is far away.

With belief in our teachers and ourselves, we must progress step by step with passion. In closing, consider this advice.