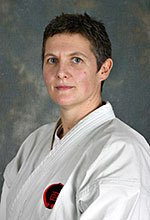 A brief, but interesting look back at the history of women entering the Karate Dojo. Check out the IOGKF International magazine for rare pictures and a profile on IOGKF’s foremost female authority, Sensei Linda Marchant. The last few months has seen IOGKF International achieve many milestones. Higaonna Sensei is turning 75 years old, Sensei Bakkies has reached 50 years of training and IOGKF England (EGKA) is celebrating its 40th Anniversary. However in October 2013, another ground breaking milestone was achieved, when Sensei Linda Marchant became the first female in the entire history of the IOGKF to obtain the rank of 7th Dan; an achievement not only for Goju-ryu, but martials arts everywhere. Everything from major newspapers in the United Kingdom, social media sites and even martial arts magazines like this one have celebrated in her triumph. Sensei Linda stood tall and performed everything that her male counterparts were also required pass to succeed in their gradings. Her constant training and determination has lead to her becoming one of IOGKF International’s most popular characters and has forged a path for women within Karate’s history books. But it hasn’t always been like this. Women’s involvement in martial arts, Karate in particular, has only come about in the last 50 or so years. Now with so many talented and inspiring female martial artists across the globe today, it is difficult to fathom that until recently it was a man’s world – full stop. To understand this we need to look back to a different time. Until World War II and the American involvement in the battle of Okinawa, Karate wasn’t a household word. Prior to this, the culture of Japan ran along the lines stated in the famous James Bond movie ‘you only live twice’ “In Japan Men come first, Women come second”. The women of the family were responsible for the cooking, cleaning and caring for the children. A harsh sounding reality, but on the western side of the globe, a women’s role was basically playing out the same way. According to all historical records available today, Chojun Miyagi Sensei (the founder of Goju-ryu Karate-ka) did have female children, but none of them were ever taught or permitted to train. Miyagi Sensei’s wife, Makoto Miyagi, was a great support to her husband and would often socialise with students before and after training took place at her home, but never actually trained in Karate. As the war ended, the Americans returned home and many soldiers took with them, the art of Karate. It rapidly became popular throughout America and the rest of the western world and competition fighting drew much attention. Oknawan instructors such as Kyuna Choko Sensei (Shorin Ryu Master) visited America in the 1970’s to teach and popularize Karate. By coincidence it was around this time that the ‘second wave’ of the women’s equal rights revolution began to run its course in the west and spread across to the east where Japan adopted similar principles. Although it is not known who was the first ever female Karate-ka, there have certainly been notable exponents across the globe who have made a name for themselves in amongst the ranks of the world best. Its seems strange to think that even 50 years ago there were no female Dojo instructors, black belts or even beginners! It is not until you think like this that you can fully appreciate and understand the magnitude of the journey of incredible women like Sensei Linda Marchant and other countless females involved in Karate across the world. Each Karate-ka has their own story and each one has been an integral part to changing the belief that Karate was only a man’s world, when today we know that it is certainly not. IOGKF International has many, many outstanding female martial artists across the globe and Sensei Linda Marchant is the fantastic role model to which they can aspire too.