A tribute article to our Master on the occasion of his 75th Birthday! Including video clips throughout Master Higaonna’s incredible life. For rare photographs and full colour layout read the latest edition of IOGKF magazine. 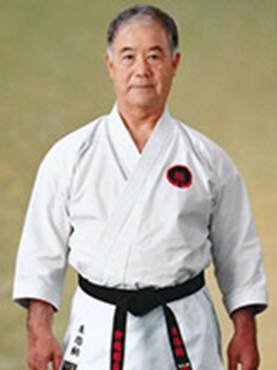 When you look back at 1938 it seems so distant to the younger generation. It was a year that saw much history created in all four corners of the world; in Europe a man by the name of Hitler was beginning to gather a following in Germany, while in Australia the first telephone link to the white house was established. And across the Pacific ocean in America young children got their first at the man of steel when Superman made his first ever comic book appearance.

At the same time in Okinawa, a small island 300 miles off the south coast of mainland Japan, a boy was born on Christmas day whose destiny would see him become a Super man in his own right.

Morio Higaonna, the legendary 10th Dan Master of the Okinawan Goju-ryu Karate style who is renowned across the world as the foremost authority of the art, has travelled from one side of the globe to the other on his quest to become what many have said to be the Master or Masters. By pushing himself to his physical limits by training his mind and body every day, he was transformed from a young man into the highest level Karate-ka of our age. The man know across the world by hundreds of thousands as ‘Sensei’, has a story like no other and as a tribute to his 75th Birthday IOGKF International shares it with it’s members.

Okinawa is a land of good people, beautiful culture and stunning nature. A land that time forgot about, it’s rich heritage with both Japanese and Chinese influences saw the creation of a unique culture to above all preached peace. It was shortly after the birth of Morio Higaonna that Okinawa would face its darkest days, whn World War II brought itself to the island. American Soldiers did battle with the Emperors forces, while U.S. war ships faced imperial Kamikaze aerial attacks. It was a desperate time and realising the danger presented, Master Higaonna’s father, a local policeman, secured passage for he and his family to mainland Japan. Three boats departed Okinawa for the mainland under heavy fire and only the boat to finish its journey was that housing the Higaonna family.

When Japan declared defeat and the Higaonna family returned to Okinawa, they were met with devastation and the fact that they were going to have to rebuild their lives from scratch. It was a tough time not only for the Higaonna family, but all Okinawan’s. It was a difficult environment to have to grow up in. Many things today’s youth take for granted, the Okinawan’s did not. Using the bottom half of Coca-Cola can for a drinking glass was just one of the small everyday practices that Higaonna Sensei and his family were faced with during this trying period. It was perhaps these hard early years that began to forge the impenetrable spirit of our Master.

There was an interest of martial arts in Higaonna Sensei from a young age and after seeing his father training at home in Karate with friend he was inspired to learn himself. He joined the Karate club training at the Naha commercial High School and worked hard to earn the clubs student Vice-president position. He also struck up a friendship with Tsunetaka Shimabukuro and the two began training Shimabukuro’s front garden regularly. Shimabukaro Sensei taught Higaonna Sensei Seiyunchin Kata and seeing the promise and potential in his friend, suggested that he present himself for training at the famous garden Dojo of Chojun Miyagi Sensei, the founder of the Goju-ryu Karate style.

Chojun Miyagi Sensei had passed away a few years earlier, but a number of students were still teaching in his place. A young Morio Higaonna was very nervous and clutching the training fee money his mother had given him tight in his hand, he made his way to the Garden Dojo with Shimabukuro Sensei’s introductions. Once the formalities were over he took his first steps in the Goju-ryu circle to which his mastery would become legend. A man a few years older than he quickly caught his eye. With lightning fast techniques and precise timing, Higaonna Sensei quickly decided this was the man he wanted to learn from.

Anichi Miyagi Sensei was only 24 at the time and up until his teachers death, had studied in private under Chojun Miyagi Sensei daily. Anichi Sensei was taught all the Kata and Bunkai by the founder and he understood the principles and teaching methods of the founder better than most. Higaonna Sensei wanted his instruction and it did not take long until his extreme effort and determination stood out and Anichi Sensei quickly picked him up as an outstanding pupil. The two forged a relationship as student and teach and history had begun to written. Higaonna Sensei also came to know Chojun Miyagi Sensei’s wife, as he would often arrive early to clean the Dojo and do chors prior to training. She would often tell him of Chojun Miyagi and the high morals he should adhere by.

As time progressed and the popularity and modernisation of Karate began, the senior students of the Dojo decided it was time to move on from the Garden Dojo and set up an indoor location and thus the Jundokan Dojo was built. Anichi Miyagi Sensei was one of these seniors and as a loyal student Higaonna Sensei followed his teacher and continued his training diligently under his instruction. The dawn of graded belt systems was creeping over the Karate landscape and Eiichi Miyazato presented Higaonna Sensei with 3rd Dan Black belt as a reward for his many hours of sweaty and dedicated practice.

With so many senior students of Chojun Miyagi all together it wasn’t long until rifts began to form as to should be the Dojo head and to how certain aspects of training should be conducted. With compromising the exact teachings of Chojun Miyagi Sensei not being a option for Anichi Miyagi, he decided to leave the Jundokan and took a job overseas, before eventually settling in Tokyo, before making his way back to Okinawa. Higaonna Sensei himself also left for mainland Japan where he began his studies at Tokyo’s Takushoku University.

Higaonna Sensei continued his practice of Goju-ryu Karate and quickly gained a reputation as an outstanding martial artist. He was approached by the owner of a small hall to begin a Dojo in the Tokyo suburb of Yoyogi. Washing cars and working on construction sites were helping Higaonna Sensei survive in Tokyo, but teaching Karate provided him with a new avenue to continue to train and support himself in one of the world’s busiest cities.

Yoyogi Dojo quickly became the most famous Karate Dojo in Japan and westerners from all over the world journeyed to Yoyogi to learn from Master Higaonna. The Dojo was very humble, but the training severe. Although the cause of the sweat, blood and tears was intense, visitors saw Higaonna Sensei’s abilities and began to strive to reach his level by following his every instruction. Many western historians were also visiting Dojo’s all over Japan during this time to document and explain martial arts to the people of their homelands. One such person to see Masters of many styles from all over Japan commented that ‘Higaonna Sensei is the most dangerous man in Japan – in a real fight!’.

Higaonna Sensei’s demand as the world’s top Goju-ryu instructor could not be contained Japan and subsequent trips in the 1970’s to Europe, Oceania and Africa made his following truly International. At the end of that decade in 1979, it was decided that the first ever International Goju-ryu Gasshuku would be held in Poole, England. Higaonna Sensei travelled to the United Kingdom and was joined by his many supporters and newcomers curious to see the Master from the East. During a meeting with the senior members of each country it was agreed that some form of organisation was needed for Higaonna Sensei’s following. With the permission of many of Okinawa’s senior Karate Masters, including Anichi Miyagi Sensei and other students of Chojun Miyagi, Sensei Morio Higaonna became the World Chief Instructor of the International Okinawan Goju-ryu Karate-do Federation or as would come to be known, IOGKF International.

Annual European training camps amongst rotating member countries were established and the IOGKF began to grow larger and larger. In 1981 Higaonna Sensei brought the world to Karate. The first IOGKF world Budosai was held during that year and for many of the world’s highest ranked instructors it was their first visit to the birthplace of the art they were so desperate to Master.

By the early 1990’s Higaonna Sensei had married his sweet, Alanna and they had moved to her hometown of San Marco’s in California with their son Eric. He established IOGKF world Honbu Dojo there. The presence of such an incredible master became another important turning point in making IOGKF truly International and IOGKF began to grow in North America and Canada. The expansion of these areas eventually lead to the creation of another annual IOGKF event, the Miyagi Chojun Festival (MCF).

As time went on, Higaonna Sensei decided that he needed to return to Okinawa to strengthen IOGKF in Karate’s homeland. Before a stay on the mainland of Japan, he returned to Okinawa where he continued teaching at the Higaonna Dojo in Makishi, a short distance from Tsuboya and the Garden Dojo of Goju-ryu style founder Chojun Miyagi.

It was the founders wish that his style of Goju-ryu, although an Okinawan art, would become a treasure for the world and that its benefits would extend far across the globe. His untimely death and limited by the capabilities of travel and communication in his time, Chojun Miyagi was prevented from ever seeing this a reality. However today, some 60 years later, the commitment of Master Morio Higaonna now see’s the IOGKF and Goju-ryu Karate-do present in over 55 different countries with over 75,000 members.

Higaonna Sensei has taken Goju-ryu to the world and then brought it back home to Okinawa again, rewarded for his efforts by his late teacher, Anichi Miyagi, with the presentation of his 10th Dan Black Belt and 2007 and with the attendance of over 1,000 members at subsequent World Budosai events in 2004, 2008 and 2012. The Master was further recognised for his efforts in 2013 when he was official recognised as a living treasure by the Okinawan government for his contributions to Karate.

If you visit the Higaonna Karate Dojo, you will not see these placards hung upon the walls, you will not see award after award. All you will see is Sensei. Training. After 75 years of life and over 60 years of practice Master Morio Higaonna is still trying to reach perfection in his own mind, body and spirit. Still considering himself a student, his mastery continues to inspire this generation and will continue to inspire future ones.

IOGKF International congratulates Higaonna Sensei on his 75th Birthday and for being an example for all to strive towards inside and outside of the Dojo.